"You haven’t done anything worthwhile until you do something for someone who can’t do anything for you."

From the deeply personal to the determinedly professional to the quietly charitable to the compassionately Jodhpuri to the wisely philosophical to the stirringly inspirational to the self-effacingly private life and times of Shri Ghewar Chand Kanunga, this space is an ode and a dedication to a talented, hardworking, and large-hearted man we should all acquaint ourselves better with and take inspiration from for more reasons than one.

The journey from the tiny village of Siwana in Rajasthan to Jodhpur over eight decades later has been an eventful one to say the least. Let’s take a trip down memory lane and acquaint ourselves with some of its salient features.

It all began on 22nd February 1936, the date Shri Ghewar Chand Kanunga was born. The first few years were spent in Siwana with the ladies of the house, including mother. Back in the day, the ladies didn’t leave their hometown to go anywhere else. The men were the ones who roamed far and wide in search of economic opportunities. This is something Shri Ghewar Chand Kanunga’s father had to do – because in Siwana and in most of Rajasthan there wasn’t much to do to earn a living, apart from seasonal farming.

Very early in his life – as a teenager – Shri Ghewar Chand Kanunga felt a deep passion for social work. He made it a point to involve himself in it every time he was presented with an opportunity to do so. In fact, so committed he became to social causes that he made it an integral part of his life and it continues to be so till date. 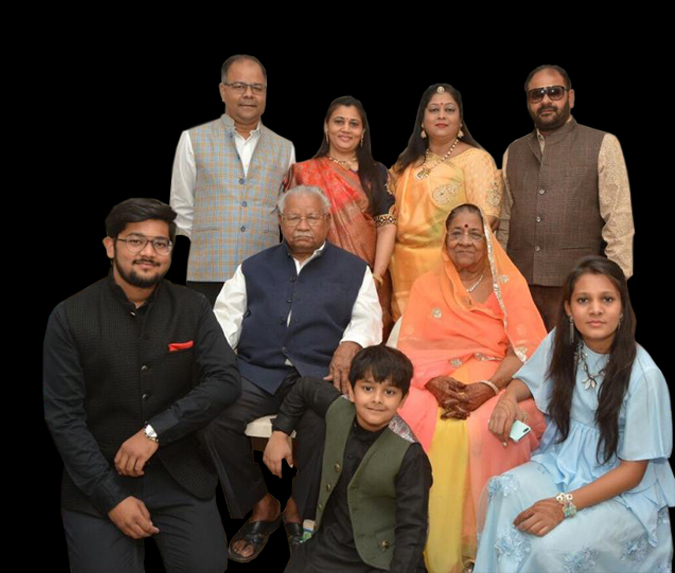 After completing his matriculation exams, Shri Ghewar Chand Kanunga joined the prestigious Madras Christian College. By then, he was extremely passionate about reading and made it a point to read at least one book per week. One of his fondest memories is of his regular weekly visits to the Adyar Public Library since the age of eight.

Speaking of fears and worries, Shri Ghewar Chand Kanunga feared nothing. He is a great believer in destiny and is certain that one only gets what is in one’s destiny. His parents too believed this. And Shri Ghewar Chand Kanunga saw no reason not to. It has stood him in good stead. He was good at studies. He was frugal, which means he never worried about being cash-strapped. He loved exploring the world around him and learning from it.

Shri Ghewar Chand Kanunga was married at an early age. And of course it was an arranged marriage – back then most marriages were. He married the daughter of one of his father’s business associates. No questions asked. And it worked out fine. Shri Ghewar Chand Kanunga considers himself extremely fortunate to have been blessed with such a supporting partner. He is certain he wouldn’t have been able to achieve even a fraction of all that he has in business and in social work if she hadn’t been stoically and solidly behind him.

Born in the year 1936 in the historic city of Siwana in Rajasthan, Shri G. C. Kanunga had his early education in Chennai. After graduating from Jain High School in Chennai in the year 1953, he joined his family trading firm engaged in the sale of goods imported from Europe, Japan and other developed countries.

Shri Ghewar Chand Kanunga never thought of taking up a job. He was born into an entrepreneurial family and didn’t see himself as anything other than a job creator. In fact, more job creator is what he feels a country like India needs.

When queried on why he chose to become an entrepreneur, Shri Ghewar Chand Kanunga says he feels like it’s what he was born to do. An independent thinker who has always wanted to help others lead better lives, he feels being an entrepreneur helps him fulfil his destiny and vision better than working for someone else does.

After gaining valuable experience in development of markets for imported items in the southern states, Shri Ghewar Chand Kanunga went into manufacturing line, first to produce artificial aluminium anodized jewellery in Kolkata before launching an ambitious project in the underdeveloped region of his native state to manufacture hot extruded and cold drawn products out of copper alloys under the name of Alcobex Metals Limited.

Alcobex, which started in a modest way with a capital investment of about Rs. 1 million, has now developed into one of the leading manufacturers of non-ferrous extruded products in the country with a total investment of over Rs. 250 crores and employed more than 1500 workers.

Another valuable contribution to the national economy has been development of ancillary industrial units around Alcobex in particular and helping the development of small and medium industries in Western Rajasthan.

In recognition of his valuable role in industrial development besides his own manufacturing business, Shri Ghewar Chand Kanunga has the rare privilege of being a standing member for the last two decades of with very prestigious State Advisory Committee for Industrial Development.

Furthermore, Shri Ghewar Chand Kanunga is associated with many commercial and social organizations. He was president of Jodhpur Industrial Association, President of Marwar Chamber of Commerce, Member of FICCI, CII, President of Sardar School and Nakoda Parshwanath Commerce college for 12 years, Chairman of Mahaveer Public School and also Badal Chand Sugan Kanwar Choradia Girls School, President of Oswal Singh Sabah and Marwar Akal Sahayta Samiti. He is one of the oldest members of Rotary Club.

For his industrial skill and very valuable social services rendered by him the President of India, Dr. Shankar Dayal Sharma had adorned him with the national award in Rashtrapati Bhawan in Delhi on 12.09.1992

And what is the message the extraordinarily hardworking and extremely self-effacing Shri Ghewar Chand Kanunga has for young entrepreneurs? Just this: If you think of work as worship. God will take care of the rest for you.

“I wish I could do more with the life god has given me. But since there’s only so much I can do in one life, I wish to do as much as I can to better other people’s lives so that they see value in helping others and thereby do more with their own life.” This is what Shri Ghewar Chand Kanunga believes is the meaning of life. He firmly believes we are given the gift of life in order to better lives. Perhaps this is what makes him one of the most selfless and admired people in Jodhpur.

His list of good deeds is too long and varied to enumerate in loving detail here. Plus, this is not something Shri Ghewar Chand Kanunga would stand for. Chronicling the good he has done for others is not something Shri Ghewar Chand Kanunga believes in encouraging one bit. He intensely dislikes talking about how he has helped others. But the fact that virtually everyone who knows him or off him admires him is proof enough of the fact that he has touched tens and thousands of lives in so many praiseworthy and profound ways.

From promoting education to saving cattle to saving families and lives that depend on cattle to generating employment for anyone who came to him to deeply and sincerely supporting the differently-abled to leading extensive drought relief in Rajasthan for years to educating women to stand on their own feet and feel emancipated to carrying out small small acts of kindness daily to always lending a helping hand to anyone who turned to Shri Ghewar Chand Kanunga for assistance, Shri Ghewar Chand Kanunga’s record of doing good is consistent, long, continuing, and stellar.

In fact, his definition of public service is very revealing – in his view, put simply, public service is the purpose of life and the process of bettering lives. Even more instructive and inspiring are the reasons Shri Ghewar Chand Kanunga is drawn to helping people. In his experience, the way to find happiness is to help others find happiness. He says people spend all their life running helter-skelter looking for happiness without realising that the path to true happiness is found by sincerely trying to help others smile. The fact that that this is a lesson so simple is what makes it so hard to discover and decipher.

The Jodhpuri Heart, Vision for Jodhpur

Why do you care about a place? What makes you emotionally attached to it? Why does Shri Ghewar Chand Kanunga love Jodhpur? These are some of the things we set out to discover.

You care about a place because you feel at home in it. Because it shelters you. Because it inspires you. Because it makes you happy. Because it gives you peace. These are some of the simple but significant reasons cities go from being a mere agglomeration of roads and structures to, in many ways, an extension of self.

This is how Shri Ghewar Chand Kanunga feels about Jodhpur. It is an extension of his dignified and giving self. It is home. It is his happy place. It inspires him. It is his muse. It is his repository of memories. It is where he found himself as a business person. It is what pushed him to explore his charitable side. It is what nurtured his vision for the future. Jodhpur is the jewel he treasures most. It is why Shri Ghewar Chand Kanunga cares so much about Jodhpur and wants it to become an even more glorious than the city it already is.

Shri Ghewar Chand Kanunga doesn’t demand much from life, but he expects more from the people of Jodhpur. He would like them to work towards making it the cleanest city in India. He wants the educational facilities in Jodhpur to reach for the sky. He dreams that the children of Jodhpur will dream big. He envisions a time when Jodhpur will be known as more than just one of the most hospitable place in the world. He sees it as a city that is more than the most favoured destination for the best handicrafts in the world. Put simply, he aspires for it to be among the great cities of the world.

Can you and me help fill his Jodhpuri heart with pride and satisfaction by turning Jodhpur into one of the great cities of the world? We can. We must. And we will. Let’s begin today.

If you’re looking for either inspiration, wisdom, guidance or all three, look no further. In our conversations with Shri Ghewar Chand Kanunga, we unearthed some pearls of wisdom that we think are worth preserving for posterity. Let Shri Ghewar Chand Kanunga and his words show you the way to go forth and conquer your fears and make your dreams come true. Welcome.

On Parents – Parents are like God. You wouldn’t exist without them.

On Hard work – Life is never easy for those who aren’t prepared to work hard.

On Children – If you want to be remembered for good, teach your children well.

On Humility – Humility is the ability to think of yourself less without thinking less of yourself.

On Determination – When someone tells me no, it doesn’t mean I can’t do it. It simply means he can’t do it with me.

On India – The beauty of India is that it means different things to different people who all love the meaning of India.

On Politics – Politics is the fine art of keeping everyone happy without playing politics.

On Charity – You haven’t done anything worthwhile until you do something for someone who can’t do anything for you.

Generous, patient, hardworking, and gentle. These are the words that turned up most often when we asked people to tell us how they feel about Shri Ghewar Chand Kanunga.

The abiding impression we came away with is that Shri Ghewar Chand Kanunga doesn’t do things to gain recognition or look good or make a big statement. He helps people as a matter of routine, because he feels that is the purpose of life.